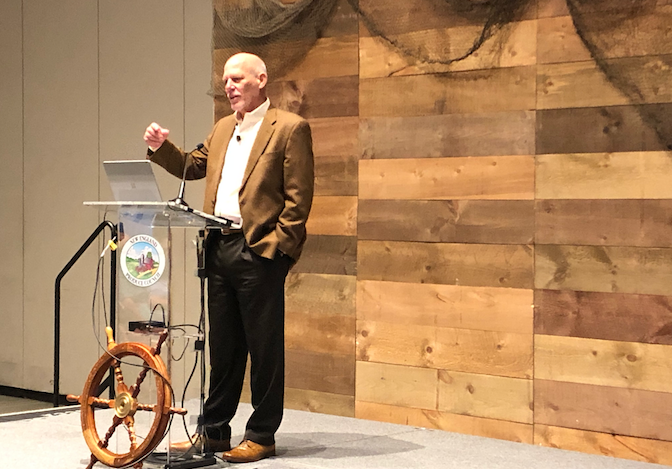 He wanted to explain how to get more foodservice business and how to improve the health of the world.

“I love the business. It’s a ‘Saturday Night Live’ crowd in here, and it’s been good to me,” Dachman told the crowd at the Sept. 18-19 expo in Boston. “But I always knew there was some higher calling other than profit.”

His two discussion topics directly correlate with his career. Dachman was senior vice president of produce for about 12 of the almost 19 years he worked for Sysco Corp. After he retired, he became CEO of Houston-based Brighter Bites.

Foodservice has challenges different from retail.

“If you can understand this, you might be better able to penetrate the business,” Dachman said.

First, it’s important to understand the foodservice distributor categories: broadliners such as Sysco with its full line; captured such as Martin Brower with McDonalds as its proprietary customer; specialty suppliers such as Hardie’s Fresh Foods; and wholesaler/retail, like D’Arrigo Bros. of New York and Costco.

Then, there are foodservice operators, ranging from quick-service restaurants to fast casual, family dining, local chains and independents.

It’s a complex system, in which supply and logistics lines constantly cross before reaching a distributor.

“I used to say, I think there are 17 ways to screw it up,” Dachman said. “Nobody understands the economics of the produce business because it’s the exact opposite of everything else you do in your life. The more you pay, the worse the quality.”

The price goes up because the yield is down, which is usually because of weather, and growers will put whatever they can in a box, he said.

There are few acceptable excuses for lower-quality or missing products in foodservice.

“We can’t give an excuse to a restaurant that they can’t give their patrons,” he said. For example, diners expect to eat the Caesar salad on the menu, despite a romaine distributor’s late delivery.

Still, operators like and need fresh fruits and vegetables because they’re great flavor enhancers, they’re on-trend for health-conscious diners who want transparency, they’re more economical than protein, and they can be promoted as locally grown, Dachman said.

As far as a distributor’s expectations, “quality and food safety are an entry card to do business,” he said. They expect a consistent, dependable supply, good communication, sales support, competitive pricing, innovation and long-term thinking, not transactional.

“We are the pharmacists of the future,” he said. “We have the product. We have the solution.”

The produce industry is selling something that can reduce obesity and childhood diabetes, yet there is not enough advertising, social-media influence or central effort at gaining this exposure, Dachman said.

The snack industry sells product that is unhealthy, convenient, delicious and consistent with the help of big advertising dollars and social-influencing power.

Dachman believes everyone in the industry has a responsibility in this area.

“I’m pissed off about it, and I’m part of the solution. The health of our country, specifically our children, is not looking very good,” Dachman said, providing these statistics:

This is where solutions such as Brighter Bites come into play.

Funded by the federal Supplemental Nutrition Assistance Program and sponsors including Walmart, the program provides bags of groceries to school families for three eight-week periods, to not only feed people with less fresh-food access, but to teach them how to eat. Besides living in food deserts with little access to fresh produce, many people live in food swamps, where unhealthy food is too prevalent.

Studies of the program have showed that scratch-cooking at home doubled for Brighter Bites families, he said.

“The big engine that makes this feasible is the giant amount of surplus produce,” Dachman said.

After two years, the average family consumes 19 additional servings of fresh fruits and vegetables a week.

“There is profit with this. That translates to over $6 million dollars in produce sales. Bottom line, we’re creating consumers that didn’t exist before,” Dachman said.

He challenged everyone in the industry to look at what they eat, what they serve at their companies and if they let employees take home boxes of their produce.

Here is a link to the article, originally posted by The Packer.

“Are you walking the walk? You’ve got to do something,” he said. “How do you expect to sell something that you don’t even live?”