The Produce Marketing Association will honor Rich Dachman and Vic Smith with leadership awards at Fresh Summit in Anaheim, Calif.

Dachman, CEO of Brighter Bites and former vice president of produce at Sysco, will receive the 2019 Robert L. Carey Leadership Award, and Smith, CEO of JV Smith Cos., will receive the 2019 Bryan E. Silbermann Collaboration Award. The recognitions are scheduled for Oct. 17, before the State of the Industry address from PMA CEO Cathy Burns. Joe Pezzini, president and CEO of Ocean Mist Farms, will present the Carey Leadership Award to Dachman. Dave Corsi, vice president of produce and floral for Wegmans, will present the Silbermann Collaboration Award to Smith.

“In my time at PMA, I have seen Rich and Vic consistently share their gifts of leadership and collaboration to help drive important PMA and industry supply chain conversations forward,” Burns said in the release. “Both are dedicated to helping strengthen our global fresh produce and floral communities, which in turn will help the association deliver on its vision to grow a healthier world.” 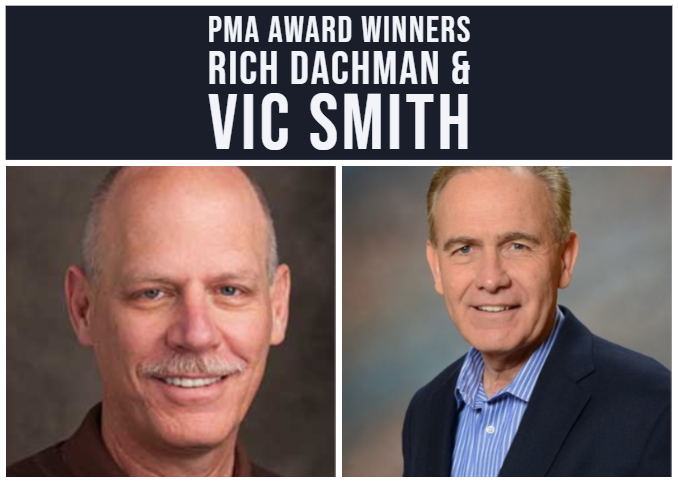 The Robert L. Carey Leadership Award was first given in 2012 in honor of former PMA president Carey, who led PMA 1958-1996 as it grew from fewer than 100 members to several thousand.

Dachman has spent more than four decades in the industry, with 28 years at Sysco, according to the release. He has volunteered with PMA and its Center for Growing Talent, serving as a Career Ambassador since the beginning of its Career Pathways program.

Dachman has served on PMA’s Fresh Summit Committee, Foodservice 2020 Steering Committee, and the Produce Traceability Initiative. He was on the PMA board of directors twice, once as chairman.

Dachman also been an advocate for the Center for Growing Talent Women’s Fresh Perspectives. “I am humbled to be considered in the company of the past recipients of this award,” Dachman said in the release. “I have gotten far more from the industry than I have given. Thanks to PMA and the industry overall for a great ride.”

The Bryan E. Silbermann Collaboration Award was established in 2016 in recognition of Silbermann’s 30 years at PMA, including 20 years as its president. The award, according to the release, recognizes collaborative leadership styles in uniting industry members or organizations to achieve solutions to industry issues.

Smith has a long track record as a collaborator who takes on challenges, according to the release. Smith has served on the Romaine Task Force, worked with Western Growers and the Center for Produce Safety, and was a key player in the Produce Traceability Initiative. He volunteered with PMA and the Center for Growing Talent for more than 10 years and is a longtime supporter of the University of Arizona College of Agriculture and Life Sciences, according to the release.

“I am certainly honored in receiving this prestigious award, more so by recognizing who it is named after,” Smith said in the release. “To follow Dave Corsi as the previous award winner is even more humbling. I thank PMA for including me in this elite circle.”

Here is a link to the article originally published by The Packer.

This milestone for Brighter Bites CEO Rich Dachman was also reported by the following publications: